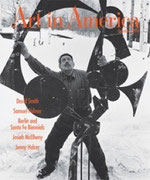 Don't let the title fool you...

Although they are abstract, Natasha Sweeten's fetchingly titled small oils on panel take cues from the real world....

These paintings, all under three feet wide, are exquisite amalgams of surface, form, and color. Like Bill Jensen, a painter who can conjure deep emotion by scraping paint down to a whisper of pigment, Sweeten works oil paint in many thin layers while imbuing her broad, bold swaths of color and angled grids with an organic joie de vivre.

Another revelation is the playful work of Natasha Sweeten, whose painted and twisted paper sculptures are as inventive as they are fun....

Elsewhere in Chelsea, at Edward Thorp, the high points of an ecumenical selection included...By contrast, Natasha Sweeten's work was a discovery of the visit...

"Lawn Games," an oil and gouache on wood panel by Natasha Sweeten, shows the artist's way of combining abstract shapes and textures to form an image that feels mysteriously coherent.